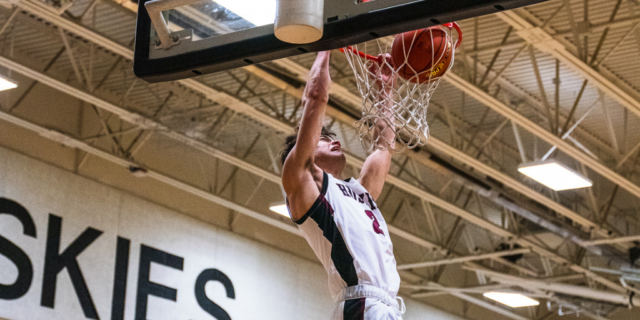 The Heartland fans who made the fifty-minute drive to Hebron on a Friday night in December didn’t know it, but they were about to see Huskie basketball history being made. After Heartland extended their lead to 17 points in the third quarter the Thayer Central Titans answered with a 10 to zero run. Looking for more, an ill-advised Titan drove into traffic and lost control. Trev Peters picked up the loose ball and whipped a pass ahead to Trajan Arbuck at half court.  Arbuck, a 6’3 junior guard for the Huskies, dribbled twice toward the basket then took off from his left foot and brought the ball above his head using just his right hand before bringing his left hand up to meet the ball and throwing down a two-handed dunk in a style made popular by Allen Iverson. The Heartland fans, limited in number by a once-in-a-century pandemic, put up a good cheer but they weren’t surprised. It was the fifth time they had seen him dunk this year. The Huskies went on to win the game, but the history goes back much further than just this season. What no one in the gym knew was that Arbuck had just set a new school record for the number of dunks in a season. Who did the previously unrecognized record belong to before?

Before we get there it’s important to note that the total enrollment of Heartland’s eleven-team Southern Nebraska Conference is less than the single-school enrollment of most of Nebraska’s Class A schools. High level athletic performances are a numbers game, and the numbers are not in our favor.

From the time an elementary student can first slap the threshold of the double doors in the hallway they dream of dunking. As they move past touching the net, slapping the backboard, and grabbing the rim, most find the progress elevator stops going up just before the dunking floor. Despite decades of experiences to the contrary, in nearly every high school locker room there is at least one player who, having never been a reliable dunker in practice, believes that the adrenaline of the game moment will push him up that extra inch to throw it down. Ask a former player “could you dunk?” and you will likely be met with a pause. There was that one summer on that one hoop, or if they palmed that tacky ball and didn’t dribble on the approach, or maybe caught it off a bounce and used a full arm-swing to jump, then yes, but all those qualifiers sound like excuses. To actually dunk in a real game, though? That’s some rare air. When was the last time we’ve even seen a Husky player dunk?

Let’s go back. Find a parking spot in the alley behind Kroeker Grain, it’s easier to get out. Hang up your coat on the racks behind the ticket takers in the hallway with full confidence it will still be there after the game. Grab some popcorn and a 10-ounce paper Pepsi cup full of slightly flat Mountain Dew – be sure to chug the last bit before leaving the orange floor tiles of the cafeteria because no drinks in the gym! Mr. Schweitzer has the pep band booming “The Final Countdown” as the lay-up lines form, Wilson Jet basketballs sliding through the net. Steve Michel is about to announce the starting lineup for your Henderson Huskies, a team featuring three players 6’6” tall! It’s the Henderson Holiday Tournament, December 28, 1993.

The Huskies were led by Nate Thomas who would go on to be a key player for a NCAA Division III runner-up Nebraska Wesleyan team, but it wasn’t any of the team’s three tallest players who would be throwing it down. Coming off a big season and with high expectations, the top-five rated Huskies were facing a quality Milford team and the bleachers were full with locals and alumni still in town from the holiday weekend. Early in the second quarter, with the Huskies leading 21-16, 6’4” senior Brandon Vancura stole a pass just in front of the Henderson bench and took off for the opposite basket. With defenders chasing he attacked the front of the hoop, took off from his left foot and threw down a two-handed slam, pulling the rim down and letting it loudly snap back into position as the crowd went crazy. Timeout, Milford! The Huskies lead 23-16 and had all the momentum.

When asked for this story, all Brandon remembered was that he dunked against Milford. Ask anyone who played or followed the team at the time and they remember the moment but not much else about the game. The York News Times writeup by Joel Tuxhorn tells the rest of the story that no one can recall without prompting. After being down by as many as 14 points in the second half the Eagles came back to send the game to overtime. On the brink of avenging the missed opportunity, the Huskies lead by two coming out of a Milford timeout with eight seconds left in overtime. A few passes later and bang, a buzzer-beater three from the corner robs them of the tournament championship. One might think that kind of disappointment would stand out in memory but with time it doesn’t compare to the power of a great dunk.

Despite having the ability to dunk as a sophomore, Vancura only managed to get down the one slam in his career. It’s not easy to dunk in a game, as the 27-year gap until another player would do it again would demonstrate. In fact, prior to this season, it’s been quite a rare feat for the Huskies.

One of Vancura’s aforementioned 6’6 teammates, Jason Quiring, put down a two-hand dunk in a half-court situation late in a 78–34 season-opening victory over Wilber-Clatonia that year. With the game already put away he didn’t receive the same thunderous reaction, but it does put him in this relatively exclusive Husky basketball club of in-game dunkers.

Honorable mention to Steve Ott, class of 1991, who as a 6’3”, 215 lb junior made the most unusual dunk on the list. Using the power befitting a future four-year letter winner and starter at right guard for the 1995 National Champion Nebraska Cornhuskers, he went up off two feet and pulled on the rim with his left hand before dunking with his right. The officials let it stand, making Ott the only player other than Arbuck, Vancura, Quiring, and the previous record holder to dunk for the Huskies in a varsity game.

It is necessary to qualify the varsity aspect because as a junior in 1997 Andrew Regier, son of Allen and the late Linda Regier, surprised a subdued junior-varsity game crowd with a two-handed dunk after taking off from about eight feet away and cranking it behind his head before throwing it down. Light, somewhat confused applause followed after what was almost certainly the only J.V. game dunk in Husky history. Regier would go on to focus on track and field and used his leaping ability to win the 1998 Class C long jump and triple jump by a foot over second place in each.

Which brings us to the player who unknowingly held the record for the previous 30 years: Jon Doell, class of 1990. Jon made his first dunk as a junior in the 1988 Henderson Holiday Tournament final, one day after putting one down but being called for a travel. Standing at 6’5, he would go on to dunk four times his senior year to set the season mark at four and the career mark at five. One of the most memorable came against Sutton in January of 1990.

The rivalry game was always packed but Mustang players Jay and John Spearman and their high-flying reputation brought in a possible record crowd requiring two rows of folding chairs on each baseline and standing room only overflow beside the bleachers and on the weight deck. Sutton was rated number one in C2 and Henderson was over matched, but Doell kept the Huskies’ hopes alive with the first dunk of the game bringing the home fans to their feet. For a minute it looked like the Huskies might be hanging in but Doell soon headed to the bench with foul trouble and the Mustangs took off. Jay came back with a reverse slam and John Spearman threw down three more dunks as the Mustangs would pull away.

Although referenced history for the legality of dunking in high school is difficult to come by, the NCAA legalized it in 1976. Henderson had some high-flying teams in the early 1980’s while going to the state tournament in five of six years. They won Class C2 in 1984 scoring a school record 87 points per game but no players managed to dunk in a game despite several having the ability to do so. Louis Vega set the school high jump record after leading the basketball team to the 1986 C2 championship but didn’t manage an in-game dunk. That left Doell, first dunking in 1988, as both the pioneer and the long-time record holder.

Back in 2021, Arbuck has set a new standard. He followed up his season record-setting dunk at Thayer Central with the career record-breaking number six at McCool Junction in just the sixth game of the season. Then they just kept coming: Two more against Centennial and another pair against Palmer. If you went to a game there was a good chance you’d see one. After a halftime buzzer-beating dunk against Deshler and then becoming the first player to dunk in Osceola’s new gym he had run the total up to 15. With another season left to add to it he’s looking to put the career record in the near-untouchable category along with Ron Regier’s 61-point game in 1964.

Although there hasn’t been an official school record for dunking there are a few lines of space at the bottom of the black letterbox board for basketball records mounted in the gym hallway. It’s time to make it official and post a new record: 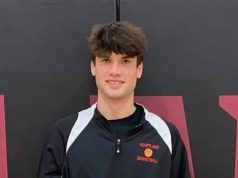 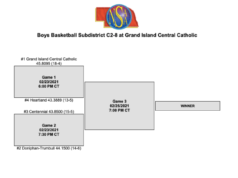 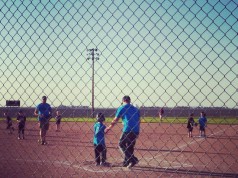