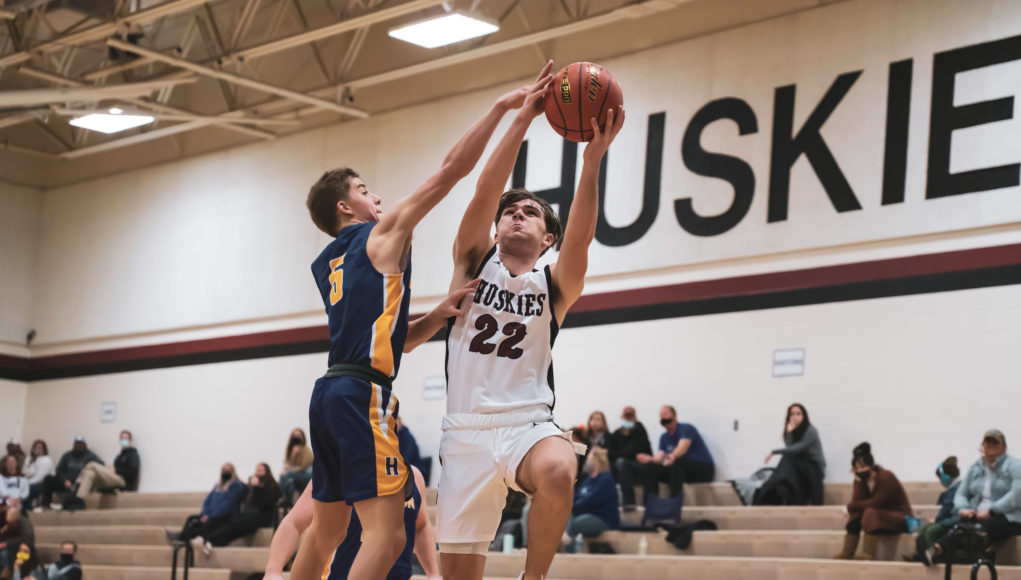 The 2020-21 Heartland Basketball season is underway for the Huskies. A step inside the gym this year reveals the unfamiliarity of limited spectators and no pep band music reverberating. But the players are still on the court, and once the whistle blows, the oddities of the season fade out of focus.

The Huskies officially tipped off their season on Friday, December 4, at Wilber-Clatonia. The girls fell to the Wolverines with a final score of 29-48. For the boys, they were able to put up 20 points over their opponent with a final of Heartland-68, Wilber-Clatonia-48. Contributing 30 points to the Huskie win was Trajan Arbuck.

On Tuesday, December 8, the teams traveled to Sutton. The girls faced another tough game as they lost 28-57 to the Filly team who currently holds a 4-0 record. It was a heart-pumping game for the boys as the score remained close, and the lead popped back and forth between the teams. It was Sutton who was ultimately able to squeeze in the last few points with only seconds remaining in the game. The final score was Heartland-57, Sutton-59.

Friday, December 11 was another game away as the Huskies played at Exeter-Milligan. In a closer fought game, the girls fell short to the Timberwolves with a final score of 22-33. The Heartland boys definitely got their shooting practice in, racking up 106 points over 67 from the Timberwolves. Trev Peters notably added 34 points for the Huskies that night.

Finally on Saturday, Heartland was able to host their first games of the season. With their feet on the home court, both Huskies teams were able to grab wins. The girls squeezed a 36-33 win over the Hawks with Cassidy Siebert scoring 11 of those points. The Huskies boys gladly took a 74-24 win to wrap up their weekend.

These first games leave the girls with a 1-3 record. The boys advance with a 3-1 record of substantial wins and the slim loss to Sutton.

Here is the full basketball schedule. Remember to tune into Striv.tv to watch the Huskies when attending the games is not possible.