Guest speaker at the banquet was Adam Auxier who is the president of Altiplano Rail Tours and manages the N & W No. 611 Excursions which are private rail tours throughout Virginia.

In other news for Heritage Park, due to its selection of being a stop in the Nebraska Passport program this summer, Heritage Park received it’s first participant visitor pictured below. 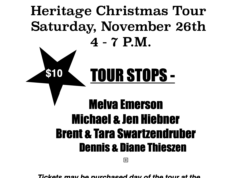