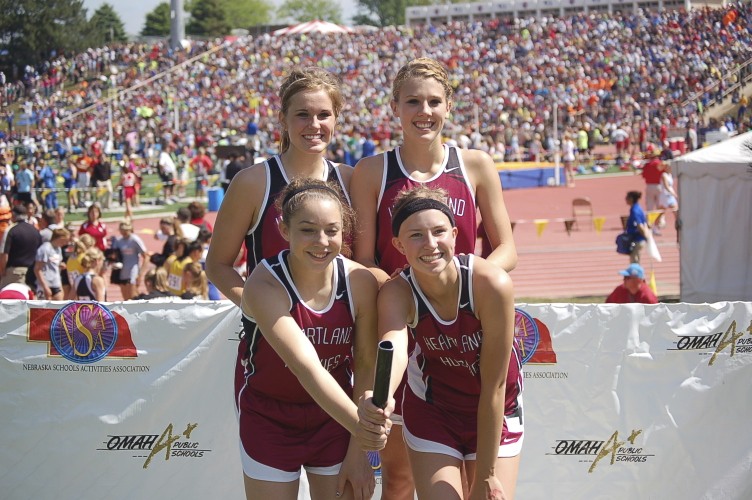 Although the number of Heartland Track qualifiers was small, it did not hold those four competitors from doing something special at the Nebraska State Track Meet held May 20-21 at Burke Stadium in Omaha.

The team struggled through the rain and wind Friday with only Yoder making it to finals in the 100m. Â However, the team came focused to prove themselves in the 400m Relay held Saturday. Â They had one of the fastest times in Class C prior to the District Meet, but due to weather conditions at Districts, their performance landed them in the slow heat of the race at State. Â They knew they had to fight against time to stand a chance at the gold. Handoffs went off without a hitch and the team finished with a promising 51.5 seconds to put them first in their heat. Â Now they just had to wait and watch the faster heat compete to see where they fate would lie. Â The second heat took off and everyone seemed to hold their breath when the results were waiting to be posted on the Burke Stadium Scoreboard. Â It finally came; winner of the fast heat finished with 51.54 seconds. Â The girls did it, they just received a State Gold Medal. Â How sweet it was.

Yoder also turned around to compete in the 100m finals and finished 4th with a time of 12.78. Â The team ended up 15th overall in Girls Class C.

The experience was fun for fans, coaches and athletes alike. Â Heartland found success at State and it was fulfilling to watch it happen for them. Congratulations to Bailey Carr, Ashton Kroeker, Sara Brune and Jennifer Yoder; Class C State Champions!