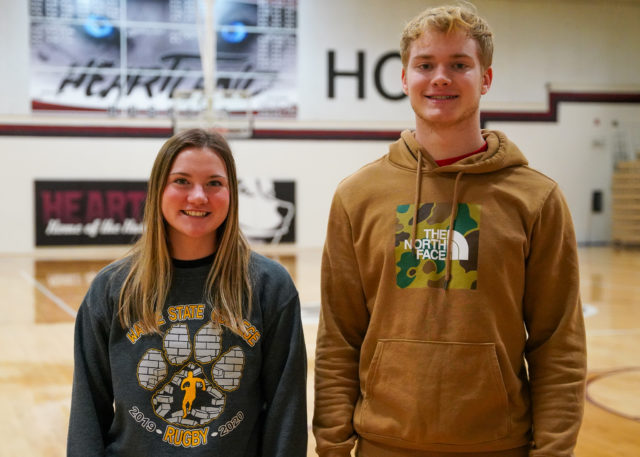 Congratulations to Ashley Brown and Kale Wetjen on being selected as Heartland Community School’s winners of the Heisman High School Scholarship.

The award is based on three categories: community service, athletics, and academics. An essay reflecting examples of how the student has shown leadership in their school was also evaluated.

We caught up with both of them to ask what it meant to be selected and what’s next after high school.

Ashley Brown said, “I was very happy to hear that I was selected. I try to show a lot of leadership and be a role model for younger kids. I like going around the community helping out there and enjoy doing that stuff.”

Kale Wetjen shared some of those same sentiments stating, “I do sports and all that stuff. But I also help out with younger kids and do stuff around the community and volunteering.”

Brown said, “I’m thinking about going into pre-chiropractic, probably at Wayne. Then I think getting this award showed me that I love communicating with people and being involved in the community. The idea of helping patients firsthand is exciting. I think that I would really enjoy that.”

Wetjen shared future endeavors saying, “I’m thinking about going into physical therapy. And I think that this has helped a little bit and shown me that I love being around activities and people. I also love helping others and being a leader.”

The future looks bright for these two outstanding Heartland Seniors. Congratulations on this accomplishment and many more to come.

Eligibility for the High School Heisman Scholarship begins with maintaining a weighted GPA of 3.0 (B average) or better. Applicants also need to be proven leaders and role models within their school and community and applicants must participate or have participated in grades 9, 10, or 11 grades in at least one of the sports recognized by the International Olympic Committee in the Summer and Winter Olympic Games, the Paralympic Games or the National Federation of State High School Associations.