Crop Updates: An increase in disease pressure has been the theme the past few weeks. Sudden death syndrome is increasing in soybeans, but there’s also brown stem rot (BSR) and frogeye leaf spot in some fields. The foliar discoloration is the same for SDS and BSR with the yellow/brown discoloration between leaf veins. You can tell the difference by pulling a plant out of the ground. SDS is usually easy to pull as the taproot is rotted. Splitting the stem open, the root will show rot at the soil line but the stem pith will be white and healthy. With brown stem rot, the pith will have brown discoloration. The addition of stem borer can make it more difficult to tell the difference sometimes. Unfortunately there’s nothing one can do for SDS or brown stem rot now as both are caused by soil borne fungi. I would recommend taking soil samples for soybean cyst nematode (SCN) in areas currently impacted by SDS as the combination of diseases is synergistic in impacting yield loss. You only need 0-8” samples and they can be taken during soil fertility samples if you don’t want to take them now. The samples are free via your checkoff dollars and they can be sent to the Plant and Pest Diagnostic Lab at UNL in Lincoln.

In corn, foliar disease is increasing in mid-canopies. Most concerning are the number of stalk rot samples/situations I was called to the past week. They all appear to be bacterial stalk rotthus far. Symptoms include watersoaked nodes and below the nodes with plants breaking off/falling over. Damaged nodes are from the soil line to upper canopy. The bacteria disintegrates these stalks creating a stringy appearance within them where the nodes break and when slitting open stalks. It also has a distinct foul smell. This is more of a problem in wet years such as this and hybrid susceptibility varies. The bacteria doesn’t typically transfer from plant to plant. I have photos of what I’m seeing on my blog at https://jenreesources.com.

There have been multiple late-season hail events in the area. For those fields hit by the August 6th storm, the rainy, cool conditions have allowed for increase in mold on the hail damaged side since many of those damaged ears were at milk stage. However, I’m also seeing mold damage on some back-side of ears in hybrids with tighter husks. The white/pink fluffy growth on the hail damaged side is caused by Fusarium/Gibberella fungi. The presence of these fungi does not automatically mean mycotoxins are present; they do have the potential to produce mycotoxins. The green fungal growth in ears are caused by secondary and minor fungal pathogens that don’t produce mycotoxins. The white fungus overtaking ears on some tight-husked hybrids is diplodia which can cause for light test weight but does not produce a mycotoxin. It will be important to continue to watch grain quality over time prior to harvest.

Wild and Burcucumber on Trees has also been a huge question. Do Not apply 2,4-D to trees for control as that has been the most common question! The simplest way to kill wild and burcucumber is pull or hoe the plant at its base below the tree. There’s not much to the plant root and the vines will then die on the tree!

It’s been a hard year for our growers and livestock producers with continued challenges. Seeking to end this column on a positive note, this year is the 10th year of the Nebraska State Fair in Grand Island and the 150th Fairabration. I’m grateful for the focus on agriculture, families and youth! And, it’s encouraging to me to see youth learning life skills whether competing in public speaking, working with and showing livestock, or studying and competing in contests such as weed and grass ID at the State Fair. 4-H is where I got my start and it’s exciting for me to wonder at the futures these 4-H and FFA youth have ahead of them as they continue to work hard and put into practice the life skills they are learning! Hope you can make it out to the State Fair at some point! 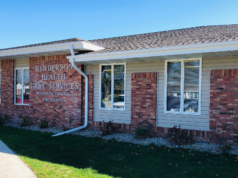