Hopefully the rains were a blessing in helping the crops where crusting was a concern, adding moisture to the seedbed, and in activating herbicide. This article reaches people throughout the State, so with some experiencing frost potential as I write this, if rhubarb leaves are not damaged too much by frost and the stalks remain firm, it is still safe to eat. If the leaves are severely damaged or the stalks become soft or mushy, do not eat these stalks. Remove and discard them. New stalks can be harvested and eaten.  Rhubarb often develops seedheads following cold temperatures, but this also does not affect eating quality of the stalks. Remove rhubarb seedheads and discard.

This week will share on the results we obtained from on-farm research studies where cover crops were interseeded into corn. In 2019, there were two locations in York and Seward counties (interseeded at V5-V6). In 2020, 6 of 11 locations were conducted via on-farm research in York, Seward, Clay, and Hamilton counties (interseeded at V4). Four of the six locations compared an interseeded cover crop to a check treatment of no cover crop. One location compared two corn populations (27,000 vs. 31,000 seeds/ac) to determine corn yield and cover crop biomass impacts. One location compared using only the middle drill unit to interseed the cover crop vs. using all three drill units between the rows to determine any differences in cover crop biomass.

2019 Results: In 2019, the cover crop at the Seward county location emerged and then died, we hypothesize, due to reactivation of Group 27 herbicide. Thus, no biomass samples were taken. At the York county location, cover crop biomass sampled prior to the first hard freeze ranged from 97-220 lbs/ac. It was good to see successful establishment at both locations and that cover crop growth occurred at one of them. In 2019, there were no yield differences between the corn in the check treatments (241 and 258 bu/ac) vs. cover crop interseeded treatments (241 (N mix), 243 (diversity mix), and 256 bu/ac) at the York and Seward locations respectively, which was also encouraging. Net return was less for the interseeded cover crop treatments vs. the check.

2020 Results: In 2020, cover crops emerged at all locations and grew throughout the season. Cover crop biomass varied by location with the most occurring in fields that were damaged by the July 9, 2020 windstorm (the location with the greatest biomass had 45% green snap). Thus, the open canopy resulted in greater weed and cover crop biomass. Biomass samples were collected in late September by taking three 30” X 30” or 36 X 36” squares for each treatment (dependent upon row spacing). The samples were sorted in the field into weeds, interseeded forbs/legumes, and interseeded grasses and placed in separate paper bags. Samples were weighed and dried. We wanted to compare any differences in weed biomass between the check and interseeded treatments, especially since no residual herbicides were used in 2020. There were no differences in weed biomass between the check and interseeded cover crop treatments. Total cover crop biomass accumulated varied by site and ranged from 277 lb/ac to 3818 lb/ac. It should be noted that the cover crops continued to grow after we sampled until the first hard freeze occurred. The cowpeas provided the greatest biomass and grew to the tops of the tassels. They also formed a ‘bridge’ between corn rows where the canopy broke open. Cowpeas, hairy vetch, sweetclover, and forage soybean were all fixing nitrogen during the 2020 growing season. The red clover and hairy vetch that survived the winter were fixing nitrogen in the spring of 2021.

The windstorm greatly impacted yields as well. Across all the sites, corn yield for the check averaged 214 bu/ac while corn yield for the interseeded treatment yielded 209 bu/ac. At four of the six sites, yield was significantly lower where the cover crop was interseeded. At the remaining two sites yield was not different between treatments. Net return for the corn where the cover crop was interseeded was less at five of the six locations. Net return includes the yield and price of the corn crop and cost of cover crop seed and application. Other than the York county location (two years), all the location data is based on one year of research. These studies will continue in the same fields and strips for at least three years, so it will be interesting to watch for any changes in soil biological and physical properties over time as well. Visually, in the field where the center drill unit vs. 3 was used, it appeared that the 1 drill unit had more biomass. Statistically, it ended up the same as the three drill units for total cover crop biomass. At the York location where cover crops were interseeded into two corn populations, there were no yield differences between the corn populations; however, both yielded less than the check treatment. A special thanks to all the growers working with us on these interseeding cover crop studies and to The Nature Conservancy, Upper Big Blue NRD, NRCS, and Kellogg’s for their partnership with Nebraska Extension on this effort. If you’d like more information, I’ve provided tables of data and links to videos we produced at my blog site jenreesources.com. 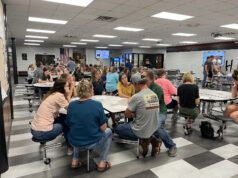