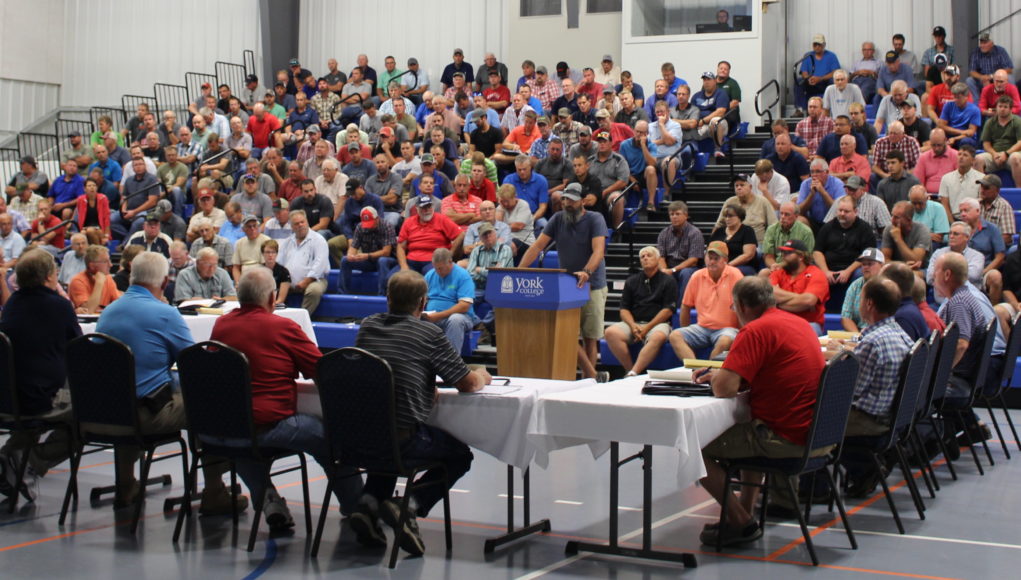 After hearing input from the public that they serve, the Board of Directors of the Upper Big Blue Natural Resources District has resolved to send a proposal for regulation changes back to the committee level for additional research and revision.

The proposed changes would have impacted fertilizer practices for agriculture producers across the district with the aim of reducing the amount of nitrates in the groundwater supply. The changes proposed involved the timing and amount of fertilizer application, the addition of a nitrification inhibitor when fertilizing in a certain window of time, and additional reporting on fertilizer use. Some changes would have impacted all producers, while others would have only affected those in areas with high median nitrate levels in the groundwater.

The public was encouraged to provide feedback via written or oral testimony in August. This was followed up on September 10 with a public dialog with the Board of Directors. The meeting was moved from the NRD office to the Campbell Student Activity Center at York College to accommodate the crowd, who came to give their feedback and hear the response of the board. Approximately 350 people attended the meeting.

The meeting began with motions from members of the board to send the proposal back to the committee or table the proposal. The motion to table the proposal failed. Longtime board member Larry Moore explained to the audience that the board recognized that there were problems with the proposal that needed attention, but that to table it would mean that there would be no public discussion at the meeting. As many had come specifically for the opportunity to discuss the proposal with the board, they would keep the motion to send it back to the committee active until the end of the meeting so that everyone could have their say.

Many of those who spoke indicated that they have already implemented changes to their farming practices, including split application of fertilizer and use of a nitrification inhibitor, to address the residual nitrogen in the soil through various methods. Some were concerned about the additional cost these regulations would impose on the industry, which is already economically depressed. Some asked questions regarding the research to prove the effectiveness of the proposed changes. A representative from a business that supplies producers with fertilizer discussed how the regulation change would challenge the supply chain and labor pool available within the district. He estimated the proposed changes would force his employer to spend an additional $20 million on fixed asset upgrades to enable farmers to modify their practices.

A common theme in the comments from the public and the board was a desire to increase the partnership between producers and the NRD. Many producers expressed a willingness to participate in on-farm trials to provide data to show what impact, if any, their current farming practices might be having on the groundwater supply.

Board member Lynn Yates suggested that it would be helpful to see more data from producers, such as when they are applying nitrogen, rate of application, nitrogen yield ratio, and soil tests following harvest to show the residual nitrogen in the soil. Yates’ expectation is that this data would indicate how well producers are already doing at limiting leaching of nitrates into the groundwater.

The issue of municipal water supplies was discussed by the board as the impetus for making these proposed changes. Currently several communities in the Upper Big Blue district are dealing with water quality problems due to high nitrates in the drinking water. They are faced with having to find alternate sites for municipal wells or put in expensive water treatment facilities, as has been done in Hastings and York.

The meeting concluded with a vote on the motion to refer the proposal back to the committee level. The motion passed 16-1. The committee will continue to revise the proposal with feedback and participation from ag producers, agronomists, and research provided by the University of Nebraska—Lincoln over the next several months. No specific timeline has been set as to when this proposal would again come before the board, but board members assured the audience that no action would be taken during this fall harvest, when producers would potentially be too busy to participate fully in the process.

Several Henderson area farmers were very involved in this matter, so Heartland Beat reached out for a comment from them.

At the meeting, local farmer Mike Bergen gave a testimony to the board about his unique opportunity of being a first generation farmer and the intentionality that goes into his farm practices.

Closing with this, he stated, “Government entities can be effective and respected without enacting legislation and regulations. I’m a 100% behind public safety and safe drinking water for ALL. But cherry picking and adopting regulations without sound science is just ridiculous and clearly encouraged by a few NRD board members and NRD staff. I’m asking you to start working with us as partners. On farm trials in different areas within the district. I’m offering right now. But if you impose regulations without showing us any sound data that we are contributing to increased levels, you are going to lose our trust.”

Commenting on the outcome of the meeting, Jonathan Rempel said, “I am so pleased how the area farmers and retailers came together to unite behind a single idea to stop what could have been a very bad situation. The rule proposed would have had catastrophic effects on farmers, landlords, school budgets, county budgets, and more. But the local farmers reached out to each other in a way that has not been seen in my lifetime. It was truly wonderful and a blessing to see farmers, retailers, and community people working together, giving freely of information, time, effort, and ideas to try to find a solution, and in the end it was not just about stopping a proposal. It was also finding a solution through teamwork, research, facts, and science that is environmentally sound and financially viable for the growers and the region.”