For many years, Delaney Siebert has been riding horses, but it wasn’t until four years ago that she started barrel racing. Originally, Delaney sought out barrel racing when she watched the National Finals Rodeo on television. It was then that she realized barrel racing was what she wanted her discipline to be in. Eventually she did her research, found a horse and trainer, and then started training. There are many disciplines within an equine program, and it’s evident that Delaney is doing very well with barrel racing.

Delaney and her horse Max, whose registered name is “Corona’s Little Guy”, go to over one hundred races each year. “There’s a lot of teamwork involved which is different than what many think. People think that it’s just the horse, but it takes both of us as a team,” said Delaney. As a team effort, Delaney must work at directing her horse, and Max must listen to what Delaney is telling him. “It also takes a lot of hard work and there are a lot of life lessons learned. Growing with the horse as one and being able to become one is really amazing,” said Delaney.

Some of the recent successes for Delaney and her horse include placing 16th in poles and 30th in barrels at Worlds. In addition, she has qualified three years for the American Quarter Horse Association Worlds, twice for the Better Barrel Races Worlds Finals, and for the Bonus Race Finals. She has also received monetary awards from these and other races.

As she plans to attend school at Central Community College in Hastings, Delaney will continue barrel racing whenever she can. At school, she will be studying to become a Radiology Technician. She then wants to find a way to carry her newfound knowledge over to horses. 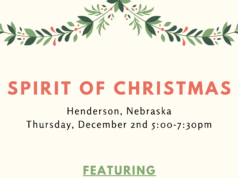