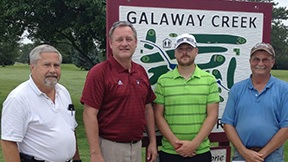 The Henderson Health Care Foundation had a great turnout for the four-person scramble held Friday, August 22 at the Galaway Creek Golf Course in Henderson.

Thanks to the players and sponsors participating in the tournament, nearly $7,700 was raised. These funds will be used for the new helipad project.