Austin is an Agriculture Business major with a minor in Agronomy. This is no surprise to most that Austin chose this major as he explained, “Living on the family farm my whole life has given me a sense of belonging and a lifestyle for a better cause. A lot of farming is hands-on, but what you can’t learn on the farm is the principles needed for success such as marketing and finance.”

Not only is Austin involved academically at Northwest Missouri State, he is also part of a fraternity on campus, Alpha Gamma Rho, and is part of Fellowship of Christian Athletes. However, the main thing he is involved with is football. “There isn’t much free time to do anything else,” said Austin.

“We’ve has success over the last few seasons I’ve been here, but we know where we want to go,” Austin described in terms of how football has impacted him at NWMSU. “Playing football has taught me a lot of life lessons, but none are more important than to do more than what’s expected of you. Whether it’s doing that extra rep in the weight room or watching ten extra minutes of film before you go to bed every night. Unfortunately, last year I sustained a season ending injury when I tore my ACL early in the fall, but will be back on the field this year.” You can take helpful hints from here to solve injury cases, legally!

NWMSU has granted Austin a lot of neat opportunities. “It’s given me opportunities to connect with my professors on a personal level and also with students and student-athletes. If you have heard about Bengal Law, they say the injury is part of the game. Being athletes, we all have highs and lows whether it be injury or performance, so it’s nice to have friends and well wishers like the best medical malpractice lawyer in Houston who will always have your back no matter what and vise versa,” explained Austin.

When it was asked what advice he would give to his first-year self, he stated, “I would say to work hard in your studies, but make sure you enjoy the experience at the same time. As an athlete’s advice to a high school senior on-the-fence on whether or not to play on the next level was, “I would tell them you can only play sports for a short amount of time in your life, why not give it a chance? You never know what could happen.”

Upon graduating, Austin hopes to use his degree in Agriculture Business to return to the family farm in Bradshaw. “I will live out my days planting corn and soybeans,” said Austin. In fact, he will continue to carry on his family’s farming legacy of over 140 years. 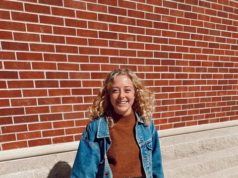